Helen Mavropodis and her family are the lucky winners of the A-Plan Caesarstone bench top competition. 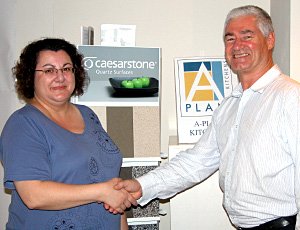 A family of four including two teenagers, Helen and her husband Scott were inspired to undertake their kitchen renovation with A-Plan kitchens after Scott helped his friend Harry Kostalidis install their A-Plan kitchen in 2007. The finished kitchen was so impressive it’s been featured in several industry magazines. 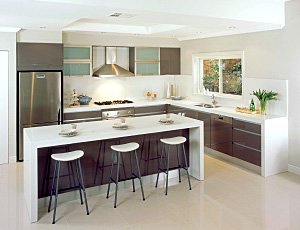 After consulting with Catherine Young, one of A-Plan’s senior designers, Helen and Scott have decided on a G-shaped kitchen with a peninsula bar. The layout will include 16 cabinets, with doors finished in polyurethane Dulux Whisper White satin. Caesarstone® was the logical choice for the bench top as the range of colours provided the most options. In the end, Helen and Scott have opted for Caesarstone® Linen.

When the components are ready, Scott will no doubt be seeking help from his mate Harry to install their A-Plan kitchen. If the result is as good as their previous effort, there’ll be another magazine feature on its way!